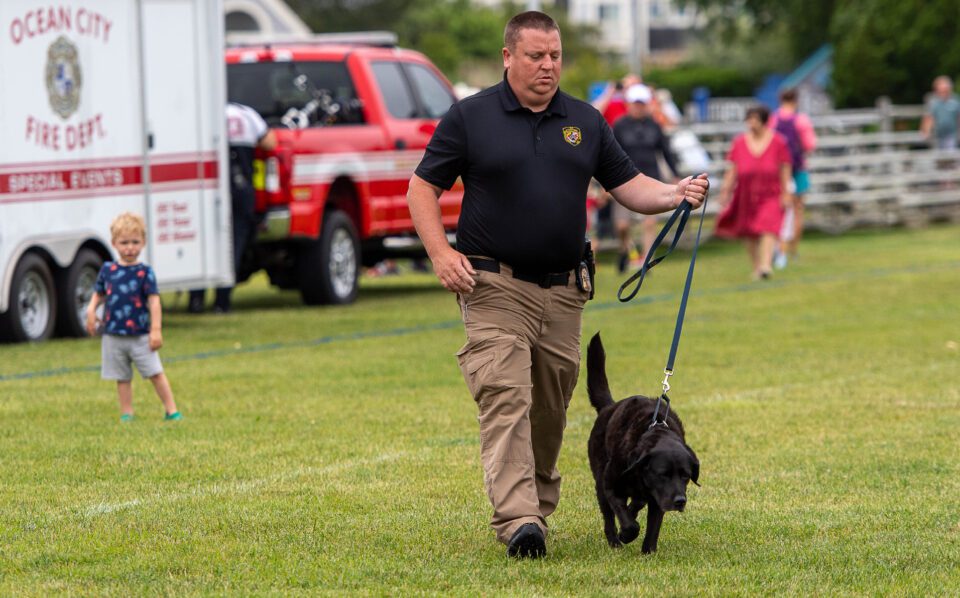 Billie and her handler, Senior Deputy Jeff Thomas, are assigned to the Lower Eastern Regional Office and have lived, eaten, breathed, and worked together ever since. Billie has worked over 400 fire scenes throughout the State of Maryland.

Those fire scenes that Billie and Thomas responded to and worked led to numerous felony arrests. Billie’s last investigations were an intentionally set car fire and a dwelling fire that was concluded to be arson, which led to an arrest. K-9 Billie also took part in many community outreach demos through the years.

Billie, a black Labrador retriever, was born November 24, 2012, and joined the OSFM/ATF team in April 2014 after graduating from the ATF National Canine Division in Front Royal, Virginia.

ATF canines use a food reward eating regimen that requires them to be hand fed each day, including weekends and holidays. Thomas has estimated that Billie has conducted 90,000 alerts during her career and therefore has bent down to reward her the same amount of times. Before using her keen sense of smell, Billie was a part of the Puppy Behind Bars program.

The Office of the State Fire Marshal has primarily utilized ATF Accelerant and Explosive Detection Canines. “The ATF Accelerant Detection Canine Program and its staff are the best in the world, and the K-9 teams they train are top-notch. Senior Deputy Thomas and Billie have been great assets to the State of Maryland and its citizens. No matter what time of day or night, they were always ready to assist investigators,” stated Chief Deputy State Fire Marshal Jason M. Mowbray.

The Office of the State Fire Marshal is so impressed with the canine’s value to a fire scene that Thomas is returning to Virginia and will begin the 6-week training ADC program tomorrow morning. He will learn his new partner’s name by the end of the week.

Billie’s career has been an enormous asset to the law enforcement community, and they worked cases in 17 of Maryland’s counties, including Baltimore City.

Thanks to Maryland Senate Bill 156, Veterinary Care of Law Enforcement K-9s Act, Senior Deputy Thomas, and his family will not have to worry about veterinarian care. Introduced by State Senator Bill Kramer of Montgomery County and signed into law by Governor Larry Hogan last year, it mandates that state and local police forces cover the “reasonable and necessary” vet costs up to $2,500 a year and $10,000 “over the life of the dog.” The bill also created a state K-9 Compassionate Care Fund, which can include donations to cover such expenses and allows local governments to create their own funds.

“With the passage of Senate Bill 156, our canine handlers and their families now have the peace of mind and the means to pay for the medical expenses of their retired partners,” stated State Fire Marshal Brian S. Geraci. “Our K9 partners are the most invaluable and versatile asset we have. They take on many tasks, and all they ask for in return is loyalty and companionship. Bill 156 was the least we could do for our canines and handlers for their years of dedication.” Geraci said.